by Vina.com Editors
in Attractions in Vietnam, Hue City

It is a traditional festival in Hue City, Vietnam with many ceremonies. The festival occurs on the Huong River at night starting from Hue Nam Temple to Hai Cat Village with a long line of boats bound up into a large raft.

1. Origin Of The Festival 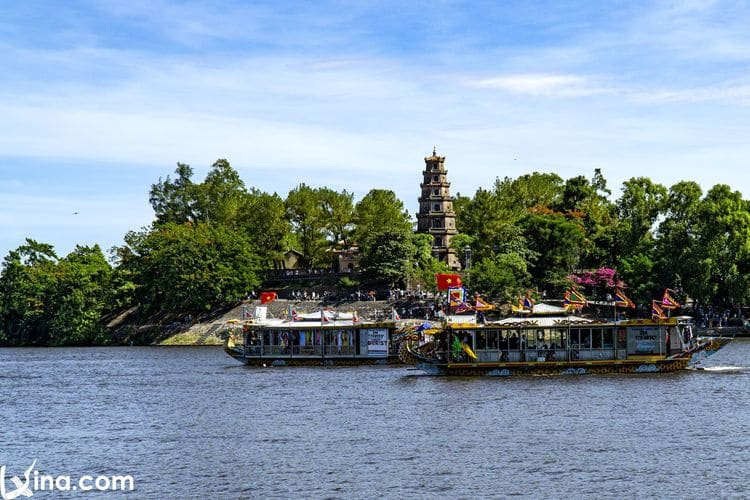 Legendarily, Hon Chen or Ngoc Tran Mountain is the place where the Holy Mother Thien Y A Na appeared to rescue people. Worshipping the Holy Mother Thien Y A Na was original from the myth of the Cham people who venerate Mother Goddess of the area Po Nagar, the daughter of the emperor – the creator of the earth and all kinds of agarwood and rice for people. Hon Chen Temple is traditionally regarded as the place to gather people everywhere for the celebration which occurs twice a year along the Huong River. 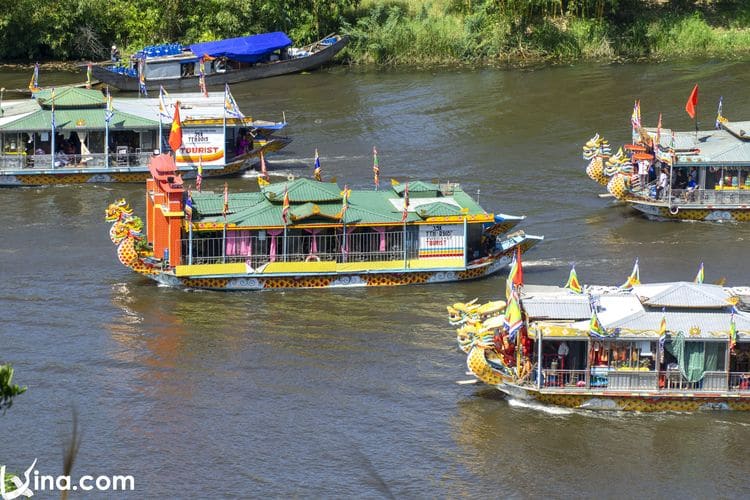 According to a historical anecdote of  King Dong Khanh’s period (1883-1885), King Dong Khanh, the foster son of King Tu Duc, was not yet on the throne due to difficult historical events. He told his mother Kien Thai Vuong to go to the temple to ask the Holy Mother Thien Y A Na whether he would become a king or not. Until 1886, Dong Khanh King rebuilt and expanded the square area of this place. The temple was named after “Hue Nam” from Dong Khanh King’s story to pay his honor to The Holy Mother Thien Y A Na. At that time, the name “Hue Nam” had the meaning of “bringing favor to the king of Vietnam country). 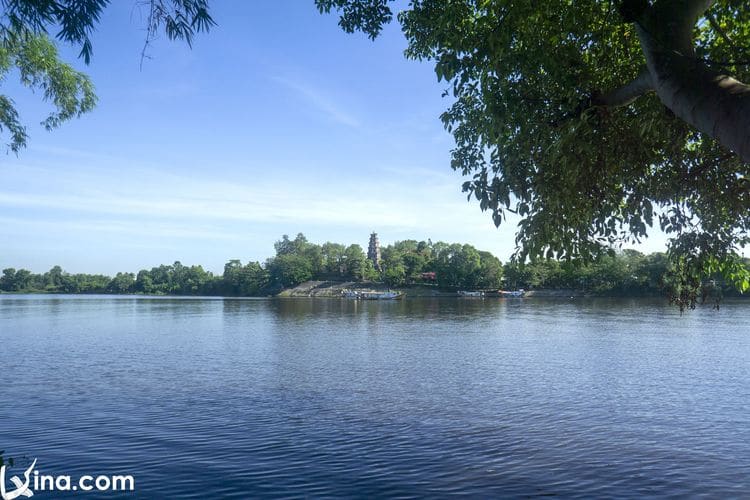 Annually, the festival attracts thousands of people nationwide and foreign to come here for experiencing or discovering cultural and spiritual beliefs of Gods, Nguyen Dynasty’ s figures as well. The festival happens twice a year – for the spring ritual ceremony in March, and for the more formal autumn in July according to the lunar calendar. The celebrations take place on two locations: Ngoc Tran Mountain and Hai Cat communal house. Hue Nam Temple Festival is traditionally considered one of the largest festivals in Hue to honour of the Holy Mother Thien Y A Na . Along with truly remarkable ritual celebrations, it contains a sacred religious atmosphere in a poetic and charming view to attracting thousands of attendants in every corner. 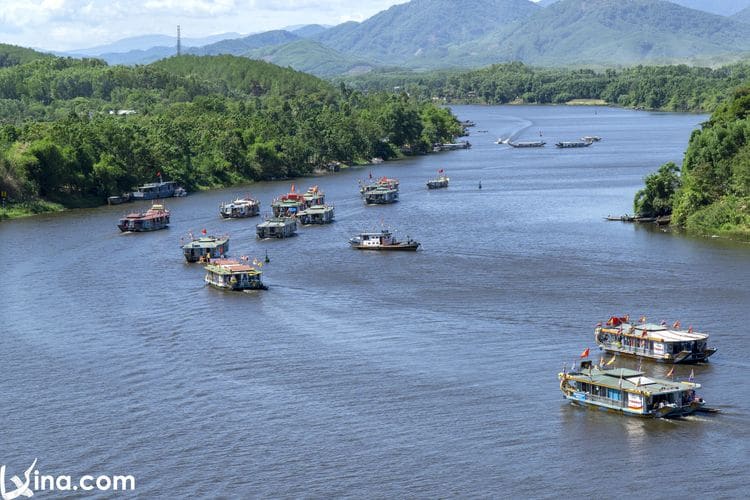 Twice a year, in the 2nd and 3rd of March and July, throngs of people come to Hue Nam temple to participate in the Thien Y Ana festival. The ceremony takes place in the solemn atmosphere, and the local people hold the rituals in the communal house, before the main ceremony, there is often a ritual to process all the Gods in the village to gather at the communal house. Among those rituals, the procession of Thien Y A Na from Hue Nam to Hai Cat communal house is the most formal one. 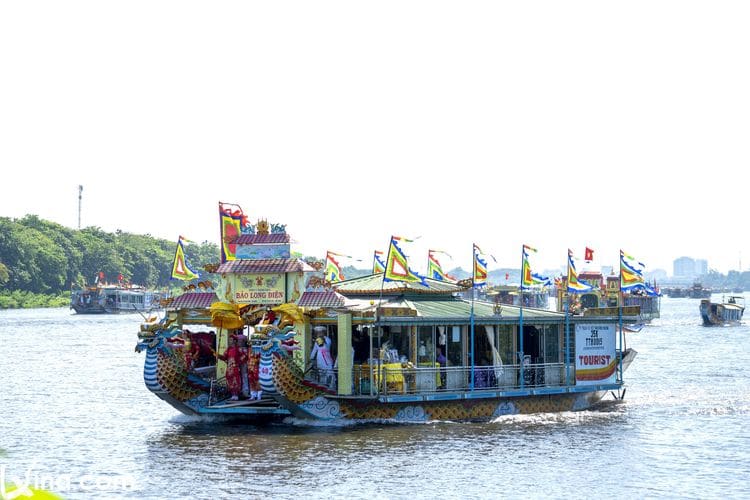 About two hundred dragon boats and thousands of tourists visit and worship in the early time, local people prepare and brings offering objects from 3-4 am. The first ritual begins at around 5 am. Toa Kham wharf (on the Huong River) is thronged with thousands of people who are excited to join the festival. The procession carries out on boats which are put together into a large raft called “bằng”. In each of the “bang”, there is the shrine of the Holy Mother along with the royal palanquin. On the palanquin is the ark which the King bestowed the Holy Mother. Next to is another” bang”, there are the altar, palanquin and ark of Princess of the Forest (Nhi Vi Thuong Ngan) and Princess of the Waterways (Thuy Cung Thanh Mau) 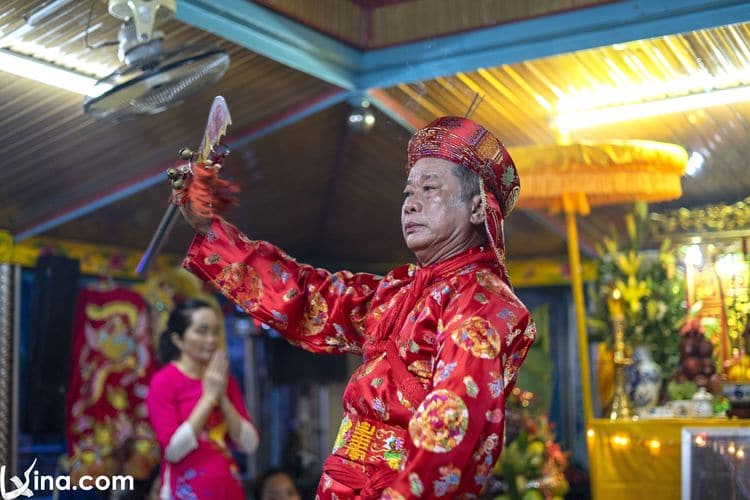 When the group of “bang” arrived at the wharf, the procession moved up the road, and then went to Hai Cat communal house. The palanquin was accompanied with “Phuong Bat Am” (the group playing eight kinds of ancient musical sounds).

While the group of “bang” started at Hue Nam palace, psychics went into a trance in the “bang” of The Holy Mother Thien Y A Na. Trances and spirit mediums were continued until the group moved to the shore. 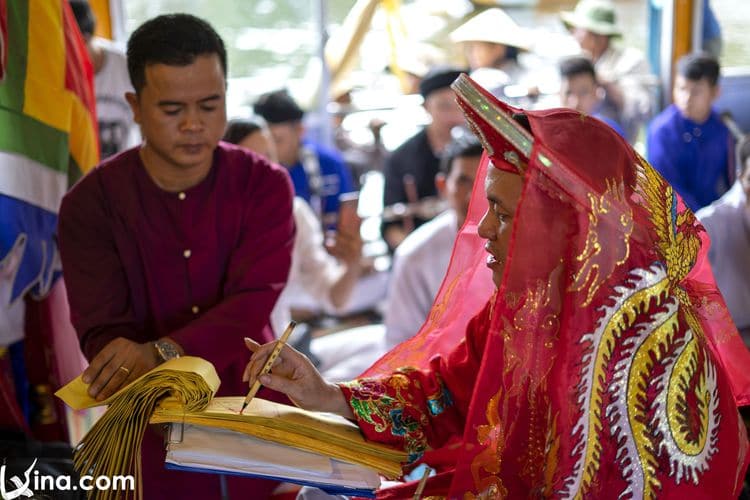 The local people followed the procession along with men and virgins of the procession. After the greeting of Goddesses, the local people held Tuc Yet ceremony in the traditional ritual. On the Huong River and in front of the communal house were spirit mediums and trances overnight. In the following day, “Chanh te” ritual started from 2 am to 5 am. After that, “Tong Than” ritual (see the goddesses off) happened.

Along with lots of crafts such as single boats, double boats, they appear very beautiful and colourful. The ceremony took place with a solemn spirit. Some songs honour Thanh Mau and gods. The believers are holding singing and dancing activities in the costumes. All things are in harmony of magic and sacred area. 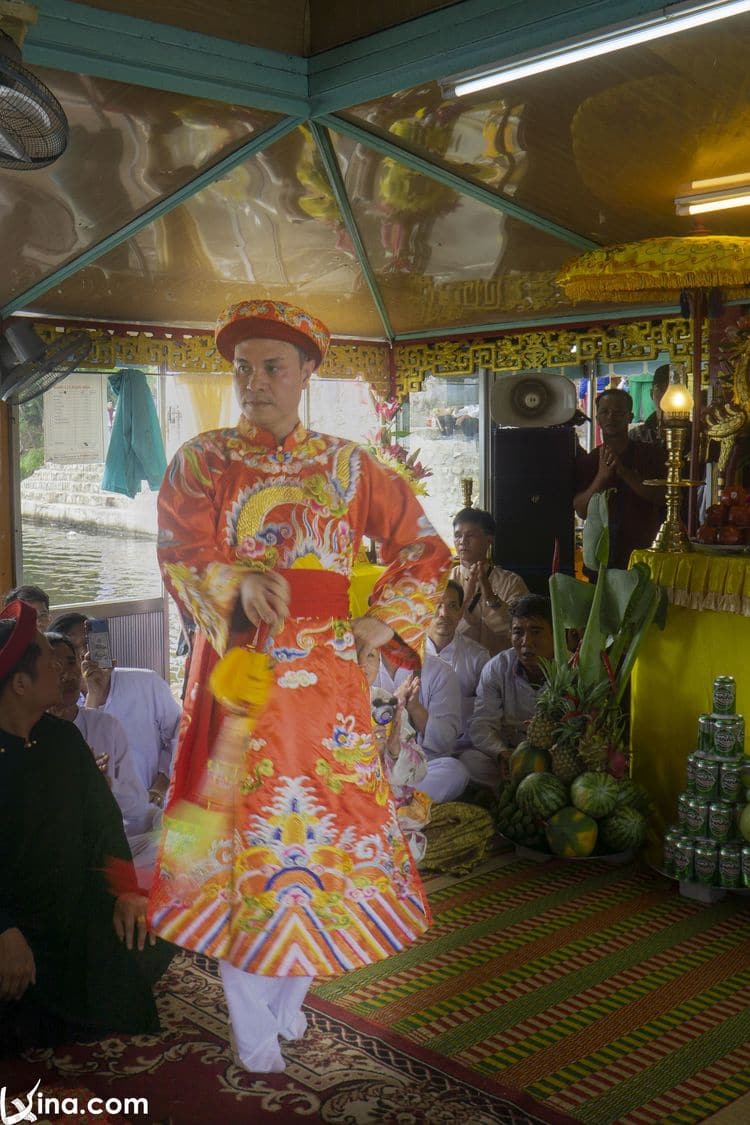 It is undeniable that Hue Nam temple is the only powerhouse that has a vitally crucial area in the spiritual and cultural life of the Hue people. It is also the only sanctuary in Hue with the coordination of court principles and folk beliefs between festivals and mating, and spiritual culture and superstition. Hue Nam Temple is the place where the fine-art decoration was in the first-class architecture in the late 19th century. Besides the role of a historical and religious monument, Hue Nam Temple is a scenic spot, a unique cultural attraction destination that visitors are addicted to Hue.

Over the historical vicissitudes, in recent years, this festival has been restored according to traditional customs and practices with local folklore. In terms of restoration, it is the preservation of traditional cultural values of an area.

9 Hong Orchard Garden - A Famous Ecotourism Destination In Can Tho, Vietnam

Ta Nang – Phan Dung, The Beautiful Trekking Paradise Is Not For The Weak